OIL PULLING RECOMMENDED BY MY DENTIST 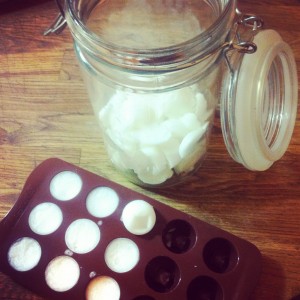 In the past, I’ve been oil pulling with coconut oil on and off. I wasn’t consistent because I didn’t make into a habit and I though that finding 20 minutes in the morning would be difficult. According to Dr. Bruce Fife, author of Oil Pulling Therapy, 20 minutes is long enough to break through plaque and bacteria but not long enough that the body starts re-absorbing the toxins and bacteria.

Now I oil pull first thing every morning. So what changed? First of all, I made these oil pulling chews which made it easy to just grab one so I started oil pulling 2-3 times a week. Secondly, I’ve just seen my dentist and he recommended oil pulling first thing every morning. My dentist said that 3 minutes would be enough if longer time was stopped me from doing it every day and if you’re interested in the energetic aspect of your body, my dentist also said that the action of swishing the oil would activate the circulation (chi) in your mouth and jaws.

My intention was therefore to start oil pulling first thing every morning for at least 3 minutes but I’ve found it easy to do longer as I’ve changed my routine around it, doing other things while swishing oil in my mouth. It might be perfect for you to swish while in the shower  While oil pulling, I prepare our lemon drink and a few other things in the kitchen before spitting out the oil, rinsing my mouth and brushing my teeth and tongue. I’ve my lemon drink in the shower After breakfast, I just rinse my mouth, no need to brush again, which my dentist said.

In a previous post, I mention that as I cleaned up my diet and got toxic chemicals out of our home, my gums stopped bleeding when brushing or flossing my teeth. In addition, oil pulling seems to make my gums and teeth less sensitive. I recommend that you give it a try and see how it improves your oral health.

WHAT IS OIL PULLING

Oil pulling is the same principle as oil classing for the skin where a high quality organic oil (food grade) is pulling bacteria out of the gums or skin. It’s the principle of “like dissolves like” where the oil binds to the biofilm, or plaque, on the teeth and reduces the number of bacteria in the mouth. Or you know how oil mixes well with oil but water and oil don’t mix.

Traditional cultures use sesame or sunflower oil for oil pulling but I personally prefer to use coconut oil for several reasons. First of all, we already have coconut oil in the house that we use for many things and coconut oil is effective in attacking Streptococcus Mutans bacteria which causes cavities.

In spite of the fact that most of us are raised with toothbrushes in our mouths, our ancestors didn’t brush their teeth with toothpaste for thousands of years. And, as far as archeological evidence suggests, most people throughout history lived until a ripe old age with most of their teeth intact and in a strong, healthy state. So why didn’t their teeth rot?

Dr Axe writes that “first of all, they ate real food and didn’t consume processed sugars and grains. Secondly, they took care of their teeth through natural means like chew sticks that they rubbed against the teeth as has been found in Egyptian tombs dating to 3000 B.C. Third, depending on the culture and region of the world, many people also oil pulled.”

HOW TO OIL PULL

HOW TO MAKE OIL PULLING CHEWS